Are You Ready for Battle? 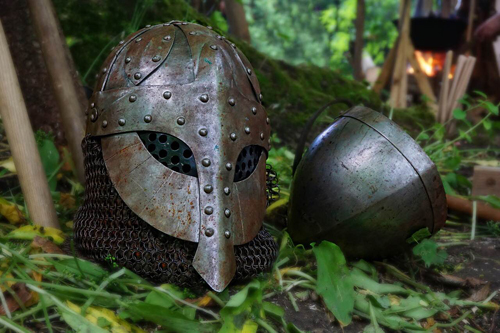 We all love our heroes.  Whether it’s in movies, books or real life there’s something within every human being that loves watching two forces meet in battle and seeing good triumph over evil.  Why does it touch us at such a profound emotional level?  It’s because we were created that way.  God created you to instinctively want to help, save, rescue and set the world right with His love, truth, justice, righteousness and peace.  He made it part of your spiritual and physical DNA so that you can be prepared for the battle you must fight.  He created you this way so that you can boldly step out and destroy those things that would hinder and corrupt the advancement of God’s kingdom here on earth.

We grew up hearing stories of brave men and women who were inspired to greatness.  Heroes from history like George Washington, Joan of Arc and Winston Churchill.  Sadly, in today’s culture heroes are few and far between.  Instead, we’ve abandoned mighty, freedom fighting warriors for sports figures, entertainers and fantasy characters from comic books.  True heroes are men and women who actually touch peoples’ lives and leave the world a better place.  God’s plan is that real life heroes will arise from His people … US!  He wants kingdom warriors who will rise up to live, fight and die for God’s eternal truths.

When we look to the Bible we see spiritual warriors like Abraham, Moses, Joshua, Daniel, David, John the Baptist and Paul. In the twentieth century spiritual giants like Martin Luther, John Wesley, Smith Wigglesworth, Billy Graham, Martin Luther King and Mother Theresa arose.  We have present day spiritual heroes like Bill Johnson, Graham Cooke, Rick Joyner, Heidi and Roland Baker to show us the way of the warrior.  They are all ordinary people who set out to do extraordinary things.  At a certain moment of time, they stepped forward and answered God’s call, “Yes … I’ll go … send me!”

These people inspire me to the greatness that God has also placed inside of ME and YOU.  You see, a warrior is someone who comes into agreement with God’s identity and destiny for his or her life.  A warrior sees themselves as God and all of heaven sees them … destined with unlimited possibilities and potential!  God is just waiting for us to get over OURSELVES, and get all into HIM.

One of my favorite movies is Braveheart, the story of William Wallace running through the highlands of Scotland, inspiring his countrymen to stand up and fight for their freedom.  He caught God’s vision in his heart and fought and died a horrendous death in order to bring freedom to Scotland.  Every time I watch it my spirit is stirred with passion because I know that there is a mighty warrior deep inside of me waiting and wanting to come forth.  When I hear him yell “FREEDOM”, every cell in my body comes alive with the knowledge that I was created for more … to bring freedom to the captives.

He said to them, “Go into all the world and preach the gospel to all creation.  Whoever believes and is baptized will be saved, but whoever does not believe will be condemned.  And these signs will accompany those who believe: In my name they will drive out demons; they will speak in new tongues;  they will pick up snakes with their hands; and when they drink deadly poison, it will not hurt them at all; they will place their hands on sick people, and they will get well.”  (Mark 16:15-18, NIV)

Fellow warriors, this is our job description.  This is our commission for open warfare.  We are to daily destroy those things that would hinder and corrupt our advancement in God’s Kingdom; to fight for righteousness here on earth; to win souls, set the captives free, change society and influence the future.

Right now you may not feel like it, but you are mighty in his kingdom. You may not know it, but the enemy does. Let me identify a few basic principles that the spiritual warrior lives by.

1. A spiritual warrior fights from his position in and through Jesus Christ. Our identity, our power and our authority all come from Him.

2. A spiritual warrior fights FROM victory, not TO victory. We already know the conclusion of this battle – God wins!

3. God’s love is the source of our life power.

4. We do not REACT to circumstances, we RESPOND to God.

5. We see everything, and every situation as an opportunity to learn, grow and advance God’s kingdom while increasing in faith and our relationship with Him.

6. We don’t avoid tough situations. We courageously march in because the battle is not ours but the Lord’s.

7. We learn to dwell securely in the secret place of God’s love.

8. We are continually developing an intimate relationship with God so profound that it governs every facet of our lives.

So here are your marching orders for today! Study these spiritual warrior principles. Measure your current actions against them and develop a battle plan for living within these guidelines! Boot camp has started and it’s time to get in shape! Remember, YOU have been called to be a HERO!